171
SHARES
713
VIEWS
Share on FacebookShare on TwitterShare via Email

A former Jewish banker pulled his daughter out of an elite $53,000 a year school because the curriculum teaches the truth about systemic racism.

Andrew Guttman took time on April 13 to pen a letter to the Brearley School in Manhattan to complain that the school’s policies on antiracism were “cancerous.” The man also opined that the classes were designed to train parents on racial sensitivity toward people of color and waste of time. And in a grand effort to waste everybody’s good Caucasian time, Guttman mailed the 1700-word letter to 650 families.

He also accused school officials of trying to brainwash the students of the prestigious all-girls school.

The letter was published on the blog of Bari Weiss, a pro-Israel activist who is known for stirring controversies and dabbling in racist rhetoric when it suits her agenda. As a result, the dumb a** letter has gone viral.

Guttman claims to be for the embodiment of principles espoused by the late Dr. Martin Luther King, Jr. both citing and weaponizing his words in the letter as he makes his argument.

“By viewing every element of education, every aspect of history, and every facet of society through the lens of skin color and race, we are desecrating the legacy of Dr. Martin Luther King Jr.,” he wrote.

Like most bigots, Guttman called the exploration of racism “racist” and contorted the words of Martin Luther King to lend credibility to his point of view.

He goes on further to deny the existence of systemic racism in America.

“Systemic racism, properly understood, is segregated schools and separate lunch counters. It is the interning of Japanese and the exterminating of Jews. Systemic racism is unequivocally not a small number of isolated incidences over a period of decades,” Guttman wrote as if the Transatlantic Slave Trade was a “small, isolated” incident.

The Moguldom Nation reported that last year, Guttman refused to sign the school’s anti-racism pledge which requests parents explain how their family’s values are in alignment with the school’s “commitment to creating an anti-racist and inclusive school community.”

Also, “one parent/guardian, to participate in required anti-racist training and ongoing reflection,” another point of contention for Guttman that he expressed in his letter, calling the sessions “sophomoric” and “simplistic.”

Parents who received the letter, according to a report by The Daily Mail, were not pleased and expressed concern, even fear to school officials that the letter was offensive and did not reflect the atmosphere they wanted for their children at the school.

In turn, the school released a letter to the parents agreeing that the letter was offensive and did not object when Guttman decided to take his check and leave. 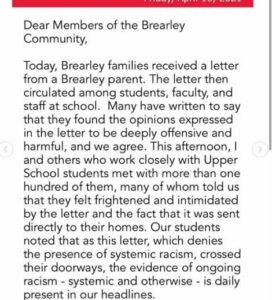 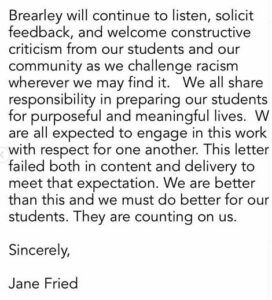 Guttman intends to let his daughter complete the school year at Brearley before moving her elsewhere. The Brearley School is offering support to its students of color who felt this letter created an unwelcome environment at the school.

Talladega's announcement came days after Fisk's debut as the first HBCU to launch an inaugural gymnastics team in Las Vegas...

Former NFL star and Hall of Famer Ed Reed's recent exit from his position as head coach of the football...

Former NFL player Ed Reed has officially walked out as head coach of Bethune-Cookman University in Daytona Beach, Florida, after...

Ron Desantis, Governor of Florida, and his administration have decided to reject an AP African American history course for high...

The former NFL player had a lot to say about the conditions at Bethune-Cookman University.

Regina Perkins Is "So Sorry" After Calling Knoxville Cops On Anthony J. Thompson Jr., Resulting In His Fatal Shooting